3d Print Your House in a Day

You might be able to 3d print your house sometime in the next decade.  Contour Crafting, a company formed by a USC Professor has scaled up the standard 3d printer layout to make a build platform big enough for the footprint of a house.  Using a movable print head on rails, a huge extruder head prints the house layer by layer using reinforced concrete.

Professor Khoshnevis claims his technology could print a 2000 square foot house in less than 24 hours, with all plumbing and wiring embedded in the print.

The company has tested wall sections and small scale demos of the final project, and the wall sections have  strength comparable to normal concretes.  The technology has the promise to lower housing prices enough that third world and low income housing build much stronger, more disaster-proof houses. The large scale 3d printer can very accurately create curves, which could lead architects to create exotic new structures.  Overhangs are possible at lower angles, and one of the demos envisions curved adobe buildings. 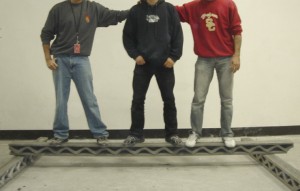 Finally, NASA is working with Khoshnevis to explore using the large scale 3d structure printing for creating housing and buildings in an automated way on the moon. Perhaps combined with the recent Washington State lunar 3d printing efforts, we’ll soon have a blueprint to build a permanent base on the moon.