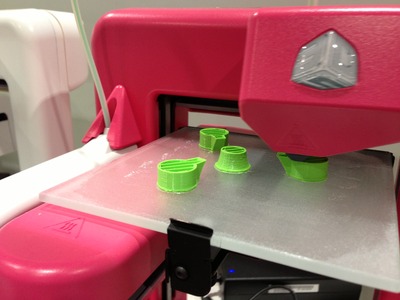 Say hello to speedy ABS with the new updates to the Cube.  3d systems announced new updates to the machine that bring it more in line with the current market leaders in consumer printers.  The updated version prints 1.5 times as fast as the older model, and ABS gives more strength to prints and lets them stand up to more stress.

Even though the bed isn’t heated, the Cube can print ABS through a slight reformulation of the plastic.  Combined with some software tweaking, the ABS doesn’t warp as it usually would without a heated bed.  Perhaps we’ll see the new formula available for other machines too, letting 3d printers who haven’t upgraded to the heated platform print in ABS as well.

The Cube also has a finer resolution, as they’ve almost doubled the accuracy.  Shipping January 21st, the best part of this update is that the price is still $1299.