Printrbot is known for making low-cost 3d printers that make good quality prints. The Printrbot LC is their answer to consumers who want to own a 3d printer at a price point of $550 with assembly required.  For the fully assembled version, expect to pay $800.  The Printrbot LC gives prints that aren’t extremely high-resolution, but for the price, it’s the best entry level model printer. 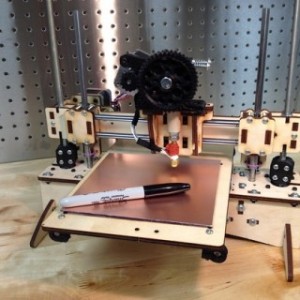 The Printerbot LC has an open frame, which reduces production cost, makes the 3d printer lighter, and makes it easier for advanced users to extend the printing space to make larger prints.  The power supply and feed spool sit detached from the main build platform.  It prints using PLA and ABS, with a minimum layer resolution of 0.1mm, but the standard resolution of .3mm shows stepping on the layers.  It also can wiggle a little with larger vertical surfaces, making the final build not as smooth, and can have trouble with overhangs.  But for the price, it’s a great 3d printer.  Upgrading to the Printrbot plus gives smoother objects, but costs an additional $150.

The Printrbot LC can connect to Mac or PC, and the printing is done through the program Pronterface.  Pronterface is an open source printing host, so true hackers could customize and extend the software piece of their 3d printer too.  Slicing uses Slic3r or Skeinforge.

The US Army recently reported they’re using a modified Printrbot to do rapid prototyping of parts for the space and missile command program.  Judging by the pictures, they extended the base to make a larger build platform.