3d Systems announced a new entry into the prosumer level 3d printer market with the CubePro. The CubePro supports three colors over a huge build space of 10.8” x 10.45” x 9.5”. The final price is likely to be just under $5000. 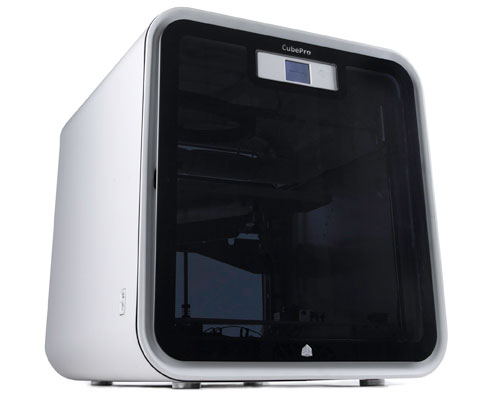 This 3d printer is an attempt to play for the dominance of the MakerBot Replicator 2X, which, priced at almost $2,000 less, might be the better option for a prosumer grade printer. The added third color can open up print options unavailable before. However, prints using multiple print heads are only available at lower print resolutions.

For dissolvable supports, the CubePro uses the 3D Systems standard of PLA for support material and ABS for the print. The PLA is dissolved using caustic Sodium Hydroxide in a heated bath. This option requires more equipment and careful technique. Like other 3d Systems printers, you must use their cartridge system for filament. So it forces vendor lock-in for raw materials.

The CubePro is a high priced system clearly targeting the lower pro tier. It’s a clean plug and go system for users who don’t have the time to experiment and just want a system that gives decent prints. If you absolutely need 3 colors, this is the easiest way to get it. If you want a better system with a lower total cost of ownership, the MakerBot Replicator 2X is the clear choice.