One of the easiest ways to get reliable prints of complex objects is by using HIPS filament.  Makerbot dissolvable filament is HIPS.  HIPS, a special polystyrene filament, dissolves in the chemical limonene, sometimes known as dilimonene or d-limonene.  Limonene dissolves the HIPS scaffolding leaving behind the PLA or ABS structure.  Huge overhangs are possible with this method, and cleanup is much easier than manually snipping, clipping, and sanding off scaffolding. What is the best disposal method for Limonene used for 3d printing?  Evaporation. 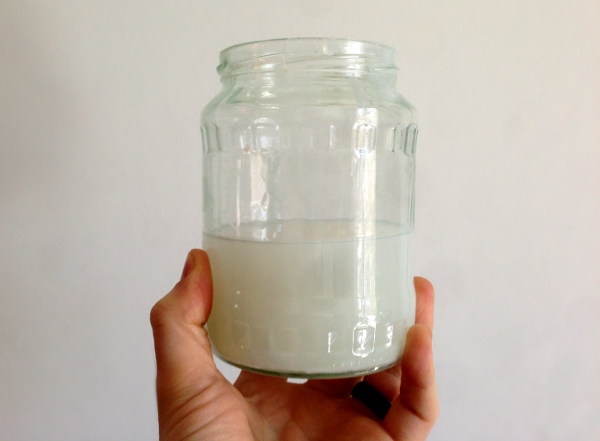 When using Limonene to dissolve HIPS, the usual method is to submerge the object in Limonene so the HIPS melts off the print.  After enough uses, the limonene is cloudy with plastic and a layer of sludge builds up at the bottom of the container.

The normal method of disposing Limonene is to dilute it with water then pour it down your drain.  If you’re using Limonene to dissolve HIPS, you’ll have plastic residue in the Limonene.  HIPS is a version of polystyrene, the same plastic used in packaging materials and styrofoam.  If you pour the plastic down your drain, it can build up in your plumbing.  Other instructions advise to incinerate Limonene, but when used to dissolve HIPS, you’d also be burning the polystyrene, which gives off toxic fumes.

If you pour your leftover Limonene into a large pan outside, it will slowly evaporate, leaving behind a deposited layer of HIPS.  Only do this outside.  Limonene vapor can irritate your lungs in a closed space.  Limonene is also considered flammable, because it has a low flash point.  If you have the limonene evaporating near your 3d printer, there’s a chance the vapor could ignite.

Evaporating the Limonene will take longer, but it is better for your plumbing, the environment, and evaporation is safer than other options.